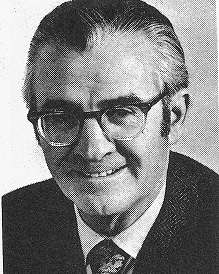 Tom Kouzmanoff was a popular prep sports editor of the Chicago Today.  He covered prep sports for over 30 years in the Chicago area.  His energy drove him to be considered one of the pioneers in prep sports writing.  His “Team of the Week” and “Player of the Week” columns were among the most popular ever written.  Tom is one of the most respected men ever in his field.  In addition to his sports writing, he was also an accomplished official before deciding to concentrate fully on his writing career.  Along with his prep duties, Tom was one of the foremost golf writers in Chicago.  In 1974, Tom was inducted into the IBCA Hall of Fame as an official to supplement his induction as a member of the media.  Tom passed away on February 18, 1997.