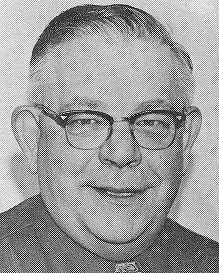 Biography:  Ralph Bednar was one of the most popular and respected sports writers in Central Illinois.  He has won first place in 1972, 1973 for sports stories in UPI.  Additionally, Ralph has won numerous awards for sports and news stories.  He also excelled in photography.  By 1974 (his IBCA induction year), Ralph had completed 24 years with The Daily Times in Ottawa where he also served as their sports editor.  Ralph Bednar passed away on March 2, 2003.