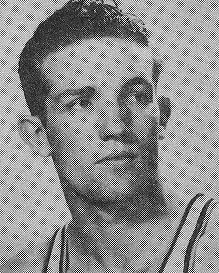 Biography:  Clive Follmer is one of the great small school basketball players in the history of Illinois prep basketball. Along with his brother Mack, Follmer earned 16 letters at Forrest-Strawn-Wing High School. During the 1948-49 season Forrest lost in the sectional finals. Clive went on to a great career in both basketball and baseball at The University of Illinois. A three-year starter Clive played on the Illini 1951 Big Ten championship basketball team which placed third in the NCAA tournament. Three times Follmer was an honorable mention choice in the Big Ten and won the Big Ten free throw award. During his senior year at Illinois he was named the athlete of the year by the Daily Illini and was also the recipient of the Big Ten athletic and scholarship medal. Follmer played on two Big Ten Champions for the Illini in baseball. After graduation, Follmer signed a professional baseball contract with the Chicago White Sox and played in their farm system two years.  Clive passed away on August 14, 2016 at the age of 84.