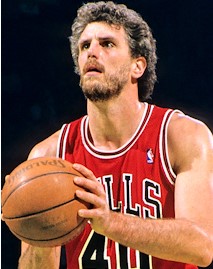 Biography:  Dave Corzine was an outstanding All-State player with Hersey High School in Arlington Heights. Dave led his team to an Elite Eight appearance in his senior year. Dave attended DePaul University, where he played varsity basketball for Ray Meyer, achieving All-American status. As a Blue Demon, Dave appeared in 111 games, averaging 17.1 ppg while shooting 49% from the field and grabbing 10.4 rpg.  Dave was drafted as a first-round choice by the Washington Bullets. He is most known for the 7 seasons he spent in Chicago as a member of the Bulls. Dave played a total of 13 NBA seasons.  During 9 of those years, he played in 78 games or more.  10 of those seasons ended with his team in the playoffs.