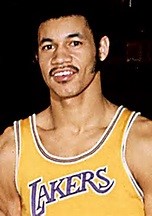 Dick Garrett was an all-state player in 1965 at Centralia HS and an honorable mention All-American player at Southern Illinois University in 1968-69.  During high school and college, Dick was selected to many all tournament and conference teams.  He was voted the most valuable player at SIU for the 1968 and 1969 seasons.  Dick led SIU to the NIT championship in 1967 as an all tournament team selection.  With the LA Lakers in 1969 he made the NBA all Rookie team and was later the captain of the Buffalo Braves.