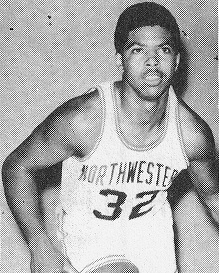 Dale Kelley is one of the many outstanding, all-state players from Galesburg HS who played for Hall of Fame Coach John Thiel.  Dale went on to become an All Big 10 performer at Northwestern University where he was selected as the team MVP his senior year before being drafted by the New York Nets.  At the time of his induction in 1973, Dale was a banker with Northern Trust in Chicago.