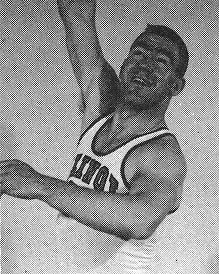 Bogie Redmon was an All-State and All-American high school player from Collinsville HS who led his 1961 Kahok team to an undefeated season and the State Championship.  Bogie then attended the University of Illinois where he received the Big Ten award for proficiency in athletics and academics.  Bogie Redmon died on February 1, 2021 at the age of 77.