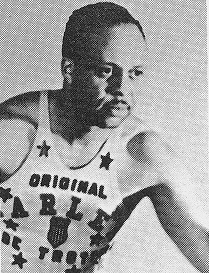 Biography:   Inman Jackson was a star player for (Chicago) Wendell Phillips High School. After high school he played independent league basketball for a few years before joining the globetrotters.  He was the team captain and one of the coaches of the Harlem Globetrotters for many years, 1929-1943.    One of the oldest and most valuable Trotters when time of service is counted, Inman was a versatile player and was able to play any role in the Globetrotters’ famous routines.  Inman was also one of the most respected of all the Trotters’ player.  Inman was not able to enjoy his Hall of Fame induction as he passed away on April 6, 1973.