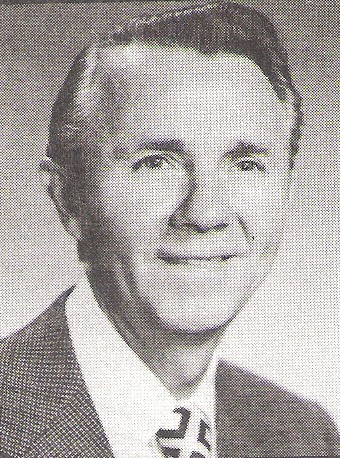 Biography: Back in 1940 when Clifford Bury took over as teacher and coach of the then newly – established Stockland Community Consolidated Schools, few of his athletes had ever bounced a basketball. But by the time he relinquished his coaching duties of 1959, Cliff had left his mark in the coaching ranks of Iroquois County. His teams won four Iroquois County Junior High Championships, two Little Iroquois County tourney conference titles. Five times Bury’s teams won sectional championships and in 1947 a state tourney championship. He also coached three junior high track and field championships. His record of 226-98 is even more impressive when you take into consideration his .697 record was accomplished against schools that 90 percent of the time were much larger than the tiny Stockland school. Bury later served as a regional superintendent of schools in Iroquois County from 1959-1986.  He contnued to serve in public office until 2002 when he retired.  Clifford Bury died on December 11, 2004 at the age of 87.