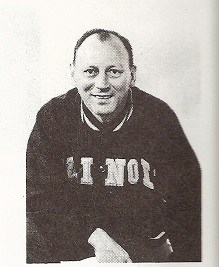 Biography: Harry Combes was an All-Big Ten selection in 1935 and 1937.  Graduating from the University of Illinois, Harry began a sparkling coaching career at Champaign High School where his 1946 team won the state championship.  He had eight high school teams in the state finals, a 254-46 record, and his 1945 and 1947 teams were state runners-up.  From Champaign he became head basketball coach at the University of Illinois where he posted a 316-150 record and was coach-of-the-year twice.  Harry Combes passed away on November 13, 1977.