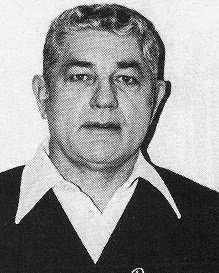 Biography:  Before coaching basketball at Ridgeway HS in Gallatin County, Bob Dallas served his country honorably in the US Navy. Then for 46 seasons, Dallas-coached teams posted 772 victories against 408 losses. Overall, Bob’s teams had winning records during 35 of those seasons. In that span, Ridgway captured 12 Greater Egyptian Conference titles and 15 conference tournament crowns. Ridgway won 5 IHSA Regionals, 2 IHSA Sectionals, and 2 Super-sectionals during Bob’s tenure. The high point of the fabled Southern Illinoisan’s career came in 1972-73. The Eagles lost their opening game, but then reeled off 32 straight wins and the Class A state championship. Dallas’ teams ran that streak to 49-in-a-row the following season and returned to Champaign with a 29-3 team. Coach of the Class A South in the 1979 IBCA All-Star game, Dallas has also been coach of the year twice in Southern Illinois and several times in the Greater Egyptian Conference. When Ridgway consolidated into Gallatin County HS in 1988, Bob continued to coach for 14 seasons, posting an additional 215-139 record. Always busy, Dallas also served as athletic director and baseball coach. In addition, Dallas farmed 350 acres and refereed some 30 games a year on all levels. Bob Dallas passed away on December 5, 2018.