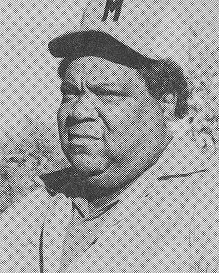 Biography: The late Clarence Faucett’s induction into the IBCA is very deserved. Faucett was a friend of basketball through his long hours of effort to Peoria youth. Certainly not a rich man financially, Faucett was richly endeared by Peoria youths who remember his guidance and efforts through basketball and other athletic programs. Faucett brought grade school kids to gymnasiums all over the city hoping to channel their minds in the right direction. He often provided a pair of shoes, a jersey, or other athletic equipment to “one of his kids,” even though it sometimes meant he went without. Manual basketball coach Dick Van Scyoc remembers Clarence from Van Scyoc’s days at Washington High School. “He’d call and ask if he could bring some poor children over for a game,” Van Scyoc said. “We always said yes because I knew what Clarence was doing for the Peoria youth. It wasn’t always a basketball game, but just about any athletic event that Clarence would take the kids to. He wanted their minds to be functioning in a positive manner.” Faucett’s death on May 18, 1981 left a void in the lives of Peoria youth. His shoes are hard to fill.