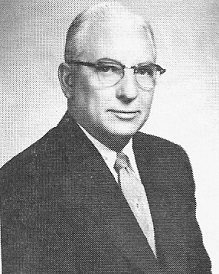 Biography: Albert Willis spent 42 years of his life attempting to develop and preserve basketball and other interscholastic activities as a justifiable part of the educational process of the high school setting.  For 28 of those years, he was the Executive Secretary of the IHSA.  Al attended Eldorado HS and McKendree College.  He was a coach and administrator at Flat Rock, Fairfield and Batavia High Schools before joining the IHSA.  Some of his pioneering ventures with the IHSA were:  the development of the IHSA Officials Department, the adoption of the molded basketball, the adoption of the fan shaped backboards, allowing African American high schools from southern Illinois to participate in the state tournament, and the plan for television coverage for the state tournament.  Albert was awarded membership to the Helms Foundation Hall of Fame.