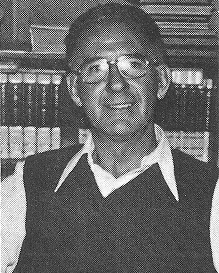 Biography: August “Guss” Soehlke was an all-state player at Edwardsville High School during the 1934-35 season.  After college, he was still in love with the game when Colliinsville coach Jim Fabri asked him to be the team’s scorer.  When Vergil Fletcher took the program, Guss stayed as scorekeeper and remained through most of the legendary coach’s tenure at the helm.  During that time, Guss scored for 13 state tournaments in which Collinsville appeared.  By trade, Guss was a milk salesman.  By avocation, he initiated a basketball program at Collinsville’s St. Peter and Paul Grade School where he also coached the teams from 1945-65.  Guss passed away on July 24, 1999.