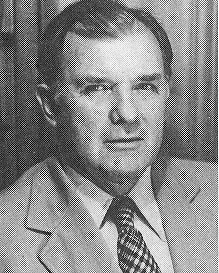 Biography: Melvin “Butts” Richter was the official timer at Collinsville HS for 26 years.  “Butts” was also selected as the assistant timer for the IHSA Class AA state tournament, followed by the appointment as official timer for the 1974 tournament.  Richter, a Conoco dealer, played in the state tournament in 1937 when he was an all-state performer at Collinsville. The Kahoks placed 3rd that year.  Melvin passed away during November of 1984.