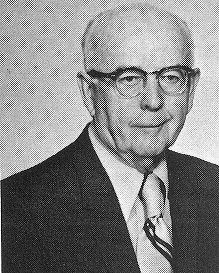 Biography: F. Merritt Allen served coaching stints at Eldorado, McLeansboro, and Carbondale high schools before taking over as coach and athletic director at Freeport HS.  Even more important than coaching, Allen proved a true friend and supporter of basketball.  As Freeport athletic director, Allen still makes trips with the team on its bus.  Even after retirement, Merritt still supported the Pretzels by attending all the home games.  At the last game of the 1975-1976 season, he was honored by the school and given a long, standing ovation for his contributions to the basketball program.  He remained a member of the Freeport Pretzel Fan Club.  Former Freeport coach Farrel Benefiel said of Merritt, “Nobody can say enough good things for all that Allen’s done for basketball in Freeport.”