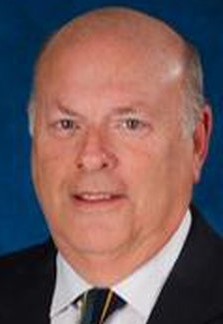 Biography: Thom Cornelis was easily the most recognized sports broadcaster in the Quad City area during his career. He started in 1972 at WQAD in Moline and moved to KWQZ in 1984, where he became sports director and covered high school basketball until his retirement in 2014. Cornelis also had a two-hour sports talk program on KFOC radio and broadcast the famed Bix 7 road race for 40 years until 2019.  The Rock Island Alleman graduate had the pleasure of dressing as a sophomore for the school’s fourth-place finish in the 1964 state tournament. Cornelis enjoyed playing against and then covering the Ernie Kivisto teams at East Moline. He also enjoyed covering the Alleman teams of Don Morris and the Rock Island teams of Duncan Reid.  The Moline teams of Herb Thompson, featuring his son Scott, and those of Whitey Verstraete, along with Cliff Talley’s East Moline United clubs, have a special place in Cornelis’ memory. Cornelis’ play-by-play nights were curtailed so he could follow his son Scot as a player on Alleman’s teams that took fourth in Class A in 1995 and third in 1996.  Cornelis was always amazed at the passion of Illinois high school basketball compared to Iowa. “The difference is like night and day,” he said.