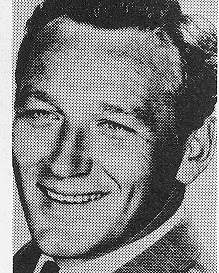 Biography:   Tom Kelly got his start in Peoria under the legendary Jack Brickhouse.  Among the stations he worked for were WMBD and WEEK-TV.  He was the play by play announcer for the Bradley Braves for many years before moving on to Los Angeles to become the full-time announcer for USC football and basketball.  Tom was a great supporter of Illinois basketball and did the IHSA State Finals play by play from 1959-1987.  Tom braodcast both the boys and girls tournaments.  As a result of his announcing career, Tom was asked to appear in several movies.  He accepted roles in Batman(1966); Against All Odds (1984); and The Fourth War (1990).  Tom passed away on June 27, 2016, two days short of his 89th birthday. Tom's excellance was also recognized by the IHSA in 2013.