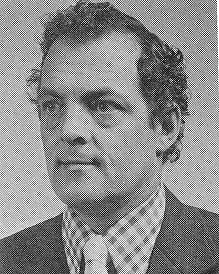 Biography: Russell Pigott worked on newspapers in Boone, Oelwein, and Muscatine, Iowa.  In DeKalb, Russell has broadcast over 1,000 high school basketball games, numerous high school wrestling meets, and over 150 high school football games.  During that time, he also worked on the broadcasts of over 200 Northern Illinois University basketball games.  He has been active in baseball from little league through the collegiate ranks.  Three times he was honored for “outstanding sports cast” by the Associated Press.  At the time of his IBCA induction in 1974, Russell was the sports director for WLBK in DeKalb.  Russell Pigott died on October 8, 1994 at the age of 62.