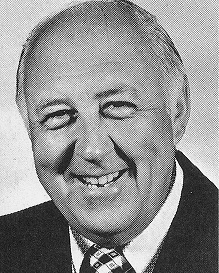 Biography: Bud Nangle was one of the first sports information directors in the nation when he took the job at Northern Illinois University in 1966.  He numbers in the thousands the friends he has made through the world of high school basketball.  Before his stint at NIU, Bud was the sports editor of the DeKalb Daily Chronicle for two years (1947-49) and a member of the sports department of the Chicago Daily News from 1950-57.  In that capacity he supervised the all state boards and selection of the all state high school basketball and football teams.  Nangle, along with earlier news media inductees to the IBCA Hall of Fame—Pete Turco, Tommy Kouzmanoff and Ralph Leo, was a fixture at old Huff Gym each year for the state tournament.  Many a story has been told over the years of the antics of this esteemed Chicago area delegation.  Before coming to Illinois, Bud served as executive sports editor of the (Toledo, Ohio) Blade and Times for nine years.  Bud Nangle passed away on October 9, 2006.