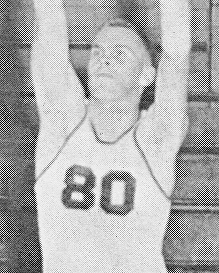 Biography: Washington High School long ago retired the jersey of 1956 graduate Tom Adams. He was an All-State Player during his junior and senior seasons and became the school’s first All-American player. He set the career record of 1,449 points scored in his three seasons as a Panther. He also set records with 581 career field goals scored and his 17 made free throws in a single game. Along with his All-American and All-State recognitions for his senior season, Tom played in the North-South All Star game at Murray, KY. He attended the University of Illinois on a basketball scholarship and lettered for his three seasons. Sadly, shortly after his 1960 graduation Tom was diagnosed with a rare blood disease that took his life.