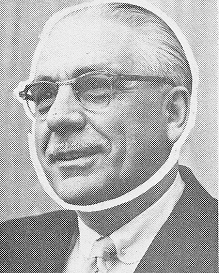 Biography: Veterans around DePaul University refer to Blair “Barney” Varnes as that institution’s greatest all-around athlete. Besides being an All-American player in basketball, Blair also competed in football, baseball, and track. He graduated in 1926. As a player, Varnes is said to have been the first player of wide reputation to introduce the one-handed shot. He played in the ABL for one season with the George Halas-owned Chicago Bruins before moving on to coaching. As a coach at North Park College, DePaul Academy, St. Patrick HS, and Leo HS, he developed the weave offense and brought an end to the “standing guard” in basketball. His influence remained in Chicago as one of his students, Ray Meyer, used the lessons he learned from Varnes for many seasons as the head coach of the DePaul Blue Demons. Varnes gave up coaching for the law and retired at age 72 from being an associate judge of the DuPage County Circuit Court. Blair Varnes passed away on April 27, 1999 at the age of 94.