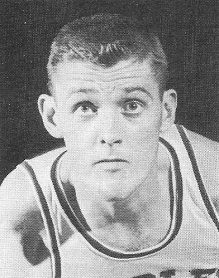 Biography: Canton High School, through 1944, had made more state tournament appearances than any other Illinois school. Aaron Preece was a part of that basketball heritage. At age 14 Preece was playing varsity basketball, and on the Little Giants’ state tourney teams in 1943 and 1944 and was the team’s leading scorer in 1944. He was all-Illini Conference and honorable mention all-state in that 1944 senior year. After serving in the Navy, Preece returned to Canton and played on the 1946 YMCA team which won the state tournament and played in the nationals. In 1947, he played at Illinois College and was the Blueboys’ leading scorer and was named all-conference with the likes of Scott Stegal, Max Norman, and John Thiel. In 1948, he transferred to Bradley where he was the sixth man and some-time starter on the great Bradley teams of 1948-1951 when the Braves were 91-19. The 1950 team was second in both the NIT and NCAA. Preece was the team’s best free throw shooter for his three years with the percentages of .824, .750, and .849. He led the nation in that category for most of his senior year and was awarded Bradley’s Dobler Trophy for free throwing. In 1951, he was the first recipient of Bradley’s Watonga Award presented annually to the student-athletes who best combine athletic endeavor with academic achievement.   Aaron passed away on March 7, 2016.