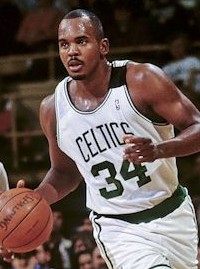 Biography: Kevin Gamble has the distinction of replacing the great Larry Bird with the Boston Celtics as the 63rd pick in the 1988 NBA draft. He first distinguished himself with a great career at (Springfield) Lanphier High School and earned all-state and all-tourney honors in 1983 as he scored 19 points in a 57-53 IHSA Class AA State Championship victory over (Peoria) Central High School. He also earned all-conference and all-city honors in 1982 and 1983.  Gamble continued his basketball career at Lincoln College for two seasons and was named an NJCAA all-American in 1985. He played two years at The University of Iowa and as a senior was on the program’s NCAA regional finalist.  Gamble played two seasons in the Continental Basketball Association before joining the Celtics and playing with them from 1988-94. He spent 1995 with the Miami Heat and finished his NBA career with the Sacramento Kings from 1996-98. He played 649 games and averaged 9.5 points on 50 percent shooting from the field and made 228 3-pointers.  Kevin returned to his home town and started the University of Illinois–Springfield program and in the first eight years coached them to a 130-79 record with two conference tournament titles and a regular-season conference title. He was also an assistant coach with Providence College and Central Michigan University before becoming a scout for the Toronto Raptors. He was inducted into the Springfield Sports Hall of Fame in 2000.