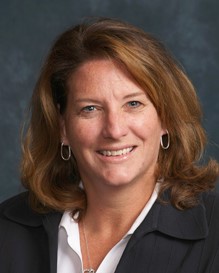 Biography: Beth received all-state player honors at (Elgin) St. Edward High School as a junior and as a senior.  She was a Ms. Basketball nominee as a senior in 1987.  Beth played center on the Green Wave’s 1985 IHSA Class A State Championship team and the 1986 IHSA 3rd Place squad.  She earned all-tournament honors for both years.  She went on to play for 4 seasons at DePaul University, where she captained the women’s team from 1988-91. She was named DePaul’s outstanding senior in athletics in 1991 and earned All-America player mention. Beth was the North Star Conference MVP in 1991.  After playing professionally overseas for a few seasons, Beth returned as athletic director and head girl’s basketball coach at (River Forest) Trinity High School where she expanded the number of opportunities for the girls there.  She also served for several years as recording secretary for the (Chicago) Girls Catholic Athletic Conference–the largest girls athletic conference in the nation.  Since 1999, Beth has served as an assistant executive director of the IHSA with oversight responsibilities for Girls Basketball, Boys and Girls Soccer, Boys and Girls Water Polo.