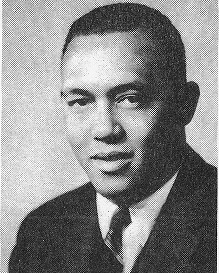 Biography: Joe S. Bertrand was an All State player from St. Elizabeth High school in Chicago.  Joe was the first black basketball player at the University of Notre Dame where he won All American recognition.  After his playing days, he was a recognizable figure in the city of Chicago where he was elected as City Treasurer, the first African American elected to a major office in that city.  Joe is the father of six children.  Joe S. Bertrand passed away on November 8, 1990.