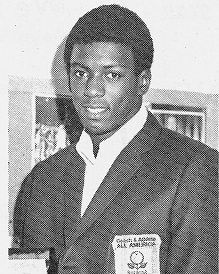 Biography: Jim Brewer was an all-state and all-American player while playing for (Maywood) Proviso East HS.  In 1969 he led his team to the State Championship.  While at the University of Minnesota, he earned All American honors as his teams gathered nation-wide acclaim.  A teammate at Minnesota was Baseball Hall of Famer, Dave Winfield.  Brewer played in the 1972 Olympics, including the United States’ controversial loss to the Soviet Union, before being drafted by the Cavaliers in the first round (2nd pick) of the 1973 NBA draft.  Brewer played nine seasons in the NBA from 1973 to 1982. Jim finished his career in the Italian League.  In 2007, the IHSA named Brewer one of the 100 Legends of the Game.