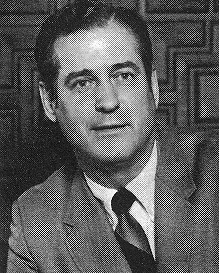 Biography: Dwight “Dike” Eddleman has been called Illinois’ greatest all around athlete of the first half of the 20th century.  He was an all-state basketball player for the late Arthur Trout of Centralia for each of his four years in high school.  The Orphans were State Champions his senior year when he scored 2702 points—a record that stood for nearly 20 years.  In addition to basketball Dike was the state high jump champion for three years and went on as an all-state football player to the University of Illinois where he was a varsity letterman.  In 1948 he took the silver medal for the high jump in the Olympic games and later played five years of professional basketball.  Dike Eddleman died on August 1, 2001.