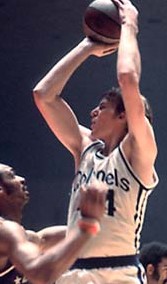 Biography: Dan Issel received high school all state and all American honors in 1967 while attending Batavia HS.  Dan then went to the University of Kentucky where he established 23 school and SEC records.  This level of play led to other honors such as all SEC for three years and All American status for two years.  Two of his records, set in 1967 are still at the top of the record books (as of this writing in 2017)—2138 career points and a senior season of 33.9 points per game average.  His teams won 3 straight SEC titles and were the top ranked team in the nation during his senior year.  After college, Dan become the leading scorer in the ABA during his rookie year.  As a member of the Kentucky Colonels, Dan set many ABA records and was regularly a member of the ABA all pro team.