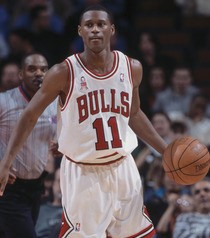 Biography: A.J. was a star player at (Peoria) Central High School before signing to play for Bob Knight at Indiana University.  He became one of the best players in the Hoosiers’ storied history, scoring 2,100 career points.  In 2000, he was a first team All-American player and the Big Ten Player of the year.  He then played for the Chicago bulls and Golden State Warriors of the NBA before spending 4 years in Europe’s professional leagues.