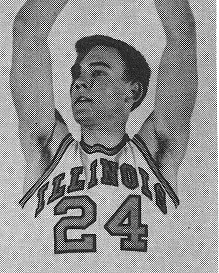 Biography: Jim Dawson was one of the all time greats at (Elmhurst) York High School.  In 1963, he was an all-state player.  After high school he attended the University of Illinois where he was a three-year regular, a team captain in 1967, and was the recipient of the Chicago Tribune Silver Basketball Award as the Big Ten’s MVP in 1967.  Jim played professionally for the Indiana Pacers.