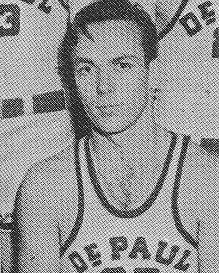 Biography: Tony Kelly played at (Chicago) Mt. Carmel High School under Johnny Jordan for four years.  He was All Catholic League during his final two years.  After high school, Tony went to DePaul University where he and George Mikan teamed to lead DePaul to the NCAA Eastern Finals in Madison Square Garden.  Tony was noted for his great floor play, leadership qualities, and was always assigned to guard the opposing team’s top scorer.  Tony played 7 seasons of professional basketball (National Basketball League) for the Sheboygan Redskins and the Baltimore Bullets.  He was a regular guard on each of these championship teams.  Tony made a shot against Kentucky from the opposite free throw line at the old Chicago Stadium that is believed to be the longest shot every made in that arena.  Tony Kelly passed away on March 1, 1987.