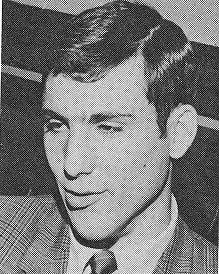 Biography: Dave Scholz was an all-state player at (Decatur) Stephen Decatur HS where he lettered three times each in basketball and baseball.  He also lettered once in football.  During his senior basketball season, he led Decatur to the Elite Eight.  Dave went on to the University of Illinois where he was named an All-American Player during his junior and senior years.  The 6’8” forward finished his Illini career in 1969 as their career scoring leader with 1,459 points.  His high was 42 points against Northwestern in a 62-61 Illinois win.  Dave was also an exceptional rebounder.  His all-around play earned the respect of his teammates who selected him as team MVP during both his junior and senior seasons.  He was captain of the Illini his senior year.  Dave was a 4th round pick of the Philadelphia 76’ers in the 1969 draft.  He played briefly for the NBA team.  Dave Scholz passed away on December 5, 2015.