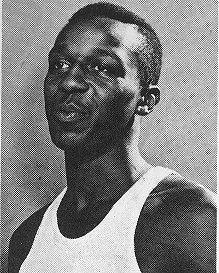 Biography: Paxton Lumpkin is still considered to be one of the very best backcourt players to ever play in the Chicago Public League.  A gifted player, Lumpkin possessed two of the quickest hands ever to feel a basketball.  Paxton excelled as the floor leader, assist man and scorer for the (Chicago) DuSable Panthers of 1953-54.  By averaging 27 ppg and 11 apg, Paxton led the Panthers to 31 straight victories and was named the team’s most valuable player.  By the conclusion of the 1954 state finals, he was generally regarded as the state’s most outstanding player for that year.  After two seasons at Indiana University, Paxton joined the Harlem Globetrotters and toured the world as a stellar addition to that group.  He returned to Chicago to work for the Chicago Parental School for Boys.  Paxton Lumpkin passed away due to cancer at the age of 54 on January 10, 1991.