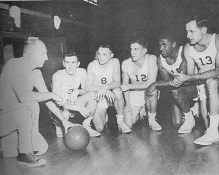 Biography: The Eastern Illinois University men’s basketball team of 1951-52 was unique and great in many ways.  They were the first undefeated team in the IIAC, finishing the regular season with a 22-0 record.  The won the National Association of Intercollegiate Basketball Invitations Tournament and finished the season with a 24-2 record.  This success came despite being one of the smallest teams in the history of the game with no starter over 6’2 and an overall average height of just 5’10.  The team led the nation in free throw percentage, committed the fewest personal fouls in the nation, ranked third in team scoring, ranked seventh in field goal percentage, and had a home win streak over 2 years of 48 consecutive games.  This team was truly exciting ahead of its time.