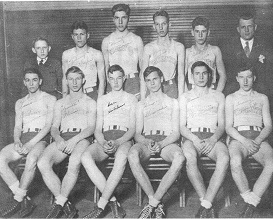 Biography: The Thornton “Flying Clouds” were the 1933 State Champions.  The name was originated by Eddie Jacquin in 1933 when he was the sports edeitor of the Champaign News Gazette.  Thornton won the state in 1933 with a record of 24-3 and finished second the next two years with a three-year record of 87-10.  The “Flying Clouds” were credited with originating the fast break and were well known nationally.