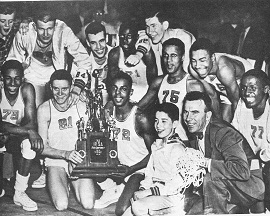 The LaGrange Lions were the 1953 State Champions, undefeated with a 29-0 record.  During this era, the Lions team was considered the strongest team physically to ever with the title.  LaGrange set several tournament records and had fine overall size, speed, and balance.