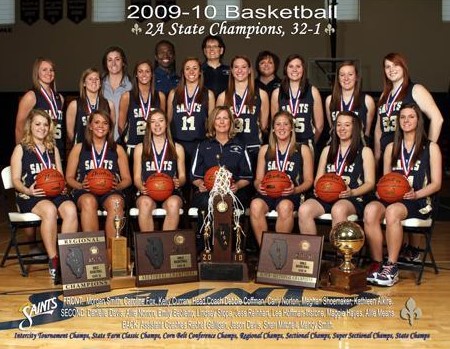 Biography: The 2009-2010 Saints of (Bloomington) Central Catholic High School had come off a first time ever school record undefeated regular season (26-0) the previous year, so when 2009-2010 began, the team motto was “Ready for More”.  They had a single goal to win the state title.  They accomplished that and finished with a 32-1 record for the season.  During the season they won championships in the Intercity Tournament, the State Farm Holiday Classic, and the Corn Belt Conference tournament.  The IHSA Class 2A title came after defeating (Quincy) Notre Dame High School .  The team’s strong balance, depth, and chemistry on the floor provided a fast style of play beginning with their full court ball press, creating turnovers which fueled their fast break attacks.  The team possessed strong leadership from their seniors and developed a role for every member on the team.  These relationships resulted in the state championship. The team averaged 64 ppg, shot 45% from the field, and averaged nearly 19 apg.  Their defense allowed an average of just 38 ppg which forcing 27 turnovers (17 steals) per game.  Many individual accomplishments and records were broken by this talented group of athletes but in the end it came down to the whole family of athletes and coaches dedicated to their goal to be “Ready for More” that won the title.