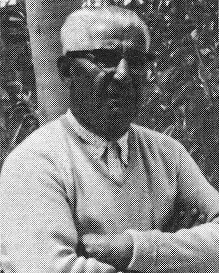 Biography: Ralph McKinzie was named by sportswriters as the greatest all-around athlete ever to represent Eureka College.  Ralph didn’t stop there.  He served 16 years as the school’s athletic director and coach for football, basketball, track, tennis, and swimming.  His basketball teams ruled the Little Nineteen Conference in 1923-24 and 1924-25.  He also spent 23 years in the athletic department at Northern Illinois University, eight of them as basketball coach producing conference titles in 1940-41, 1944-45, and 1945-46.  As a basketball coach, Ralph’s career record was 218-211-1.  As a football coach at Eureka College, Ralph was the coach of future President of the United States, Ronald Reagan.  Reagan was an offensive guard from 1928-32,  After his retirement in 1964, Ralph continued to help at Eureka College as a trainer and assistant football coach.  Ralph McKinzie passed away on December 7, 1990.