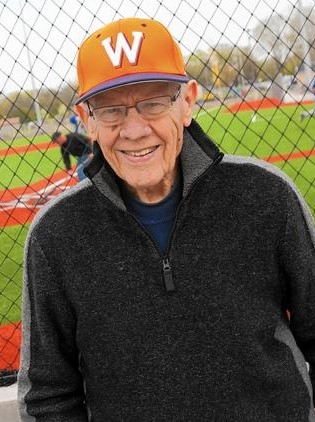 Biography: For 24 years when Wheaton College basketball was mentioned, the first person thought of was Lee Pfund, the Crusaders Head Coach.  After serving five seasons as an assistant coach at Wheaton, Lee took charge as head coach for the 1951-52 season.  Pfund served as its head coach through 1974-75, a total of 24 seasons.  His teams amassed a mark of 362-240.  In his second year at Wheaton, The Crusaders posted a 9-0 record to win the College Conference of Illinois and Wisconsin (CCIW).  Beginning in 1956, Pfund’s teams grabbed four consecutive CCIW championships with identical 14-0 records.  The 1957 Wheaton College team won the NCAA College Division (now Division II) championship with a 28-1 record.  Lee Pfund died on June 2, 2016 at the age of 96.